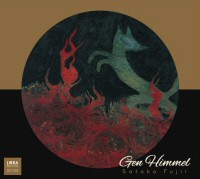 Satoko Fujii is back after only a short time since "Spring Storm" (Libra 2013) with a solo piano CD, "Gen Himmel" (Libra 2013), only her third solo release during the past two decades. She dedicates this CD, the title of which means "Toward Heaven" to those friends who have passed away in the past two or three years. The music is not meant to be solemn, but it is rather intended to be a peaceful, happy recording meant to stress the happy and beautiful lives they each led. 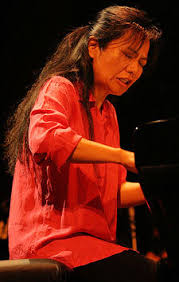 Once past the first one minute of the CD, which opens inside the piano with some rather harsh sounds, the music settles in with a series of 12 lyrical passages. It is a CD unlike most others I have heard from Fujii, with less experimental sounds and more lyrical passages than ever before.

As noted, once the first minute passes, the short title tune settles into a nice passage of quiet reflection. Some songs are haunting, others uplifting. "In the Dark", the second tune, is played as if Fujii was thinking about each note before it is hit, a very deliberately paced melody that flows nicely from start to finish with great simplicity and charm. "Hesitation" is played inside and outside the piano but is much different than the opener, with a simplicity as well to its melody. "Take Right" is the longest tune at eight minutes. It starts as a pretty little abstraction of a tune, more like listening to raindrops falling, builds in intensity, and then settles back again. It is a dazzling peace with complex chords and harmonies. 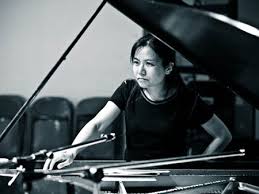 All in all this is a special impressionistic set of music that will thrill those who like modern lyricism ala Myra Mehlford, Paul Bley and others. Its definitely modern but not way out on the edge, in fact it is not edgy in the least. Meditative at times and intense at others, the music is complex, lyrical, and lovely. A beautiful set to float away upon.
Posted by a jazz listener's thoughts at 6:42 AM