On the Straight and Narrow: Mainstream Music I Have Just Purchased

This is a simple and straight-forward post, just as the music is straight-forward mainstream jazz (but not simple). So here is a list of things I have purchased in the past couple of weeks. Some aare new, some fill in spaces in the collection, but all are excellent. They are:


"Maybeck Recital Hall Series" (Concord 1990 - 1996) Volume 21 Jessica Williams, Volume 1 Joanne Brackeen, Volume 5 Stanley Cowell, Volume 25 Cedar Walton, Volume 36 Toshiko Akiyoshi. For a short period of about seven years, Concord produced a series of 42 solo piano recitals (and 10 duo recitals) from the Maybeck Hall on the UC Berkeley campus, a hall that according to the literataure has an unusually rich and warm, yet bright and clear acousit quality, along with two Yamaha Grand Pianos with their own exquisite sound. The list of jazz pianists is of course a who's who of the greats around for these recitals, beginning with Joanne Brackeen and including luminaries such as Hank Jones, Steve Kuhn, Jaki Bayard, Dick Hyman, John Hicks, Keny Barron, and on and on. Each recording is a gem -- the soloists chose their programs, which inlcuded many standards but also a number of originals, and played them before a small house of perhaps 60 people. I had a number of the recordings in my collection, but did a search recently to add to them, adding the  five listed above. Many are out of reach price-wise since they are all discontinues, but these were not and are well worth the time to find. From the ones I have I would particularly note the Hank Jones, Fred Hersch and Kenny Barron recitals, but all are worth having at a reasonable price. For solo piano lovers these are  must. 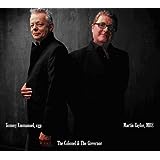 Tommy Emmanuel and Martin Taylor "The Colonel and the Governor" (Mesa Blue Moon 2013) -- Two veteran British guitarists get together with acoustic instuments to play 14 tunes, among them "Jersey Bounce", "Heat Wave", Lullaby of Birdland", and "Secret Love." Beautiful. Jimmy Amadie Trio "Live! at the Philadelphia Museum ofArt" (TP Recordings 2013) -- Amadie's story is amazing and if you don't know it you should check it out. Briefly, he developed severe tendinitis in his hands about 50 years ago while playing with some of the name bands of the period. It was so bad and required so much surgery that for years he couldn't play, or could only play for about 30 minutes at a time, with months of rest in between. Somehow he put out a number of top-notch recordings over the years, ecah taking several sessions to complete. But this one is different -- it is a recording of what  will be his last performance for us, a one hour plus recital of 12 vgreat old standards played in the style of Oscar, Hank or others with whom Amadie once hung with. Great set and a worthy valedictory. 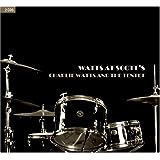 Charlie Watts "Watts at Scotts" (Sanctuary 2004)-- When he is not  at his usual place on the Rolling Stones bandstand, Charlie Watts likes to reach back into his formative days to play jazz. A formidible jazz drummer, Watts has produced a couple of big band CDs as well as a few others, including a drum solo CD honoring other greats. Here he has financed a very formidable tentet with many well-knows players from the U.K. and the continent like Julian Arguelles on baritone, Gerard Presencer on trumpet, and Peter King on alto and soprano saxes. Two CDs full of choice playing. 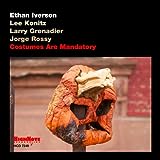 Ethan Iverson, Lee Konitz, Larry Grenadier, Jorge Rossy "Costumes are Mandatory" (High Note 2013) -- Just out, this CD lists all four names as co-leaders, and the way the music is belended by these old pros speaks to that beutifully, although Lee Konitz, the sax master at age 85 does get out in front a lot. Which is a good thing since he still has the chops to do some marvelous things with his alto. Iverson supports Konitz with some fine improvisation and comping of his own throughout, and the team of Grenadier and Rossy keep it all under their control with a sterling floor for them to play on. Many Iverson compositions, a few by Konitz plus "Blueberry Hill" and Body and Soul" make for a fine set. 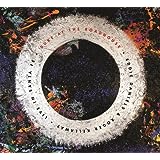 Eddie Daniels and Roger Kellaway "Duke at the Roadhouse" (IPO Recordings 2013) -- What fun these two were having one night in Santa Fe, as was the audience, as these two old pros spun out tunes like "I'm Beginning to See the Light" , "Mood Indigo" and "It Don't Mean a Thing" among the ten tunes honoring the Duke. Clarinet and piano, with a touch of cello by James Holland and a tenor by Daniels makes for a lot of fun, a lot of swing, and a great time. These two have done it before on IPO, and I am really glad they did it again. I love this CD. 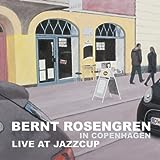 Bernt Rosengren, "Live at Jazzcup" (Stunt 2013) -- Year ago there was a ad campaign showing a people with a range of ethnicities eating LKevy' rye bread, with the tag line "You Don't Have to Be Jewish to Love Levy's." With this CD it is abundantly clear you don't have to be American to swing like there's no tomorrow. Bernt Rosengren on tenor sax, with a piano trio of Ole Kock Hansen on piano, Jesper Lundgaard on bass, and Niclas Campagnol on drums step lively with six extended tunes -- "Autumn Leaves", "I'm Old Fashioned", "Body and Soul", "There Will Never Be Another You", "Lover Man", "Jazzcup Blues" -- that have great panache and plenty of room for fresh ideas and tuneful play. Great straight jazz from overseas.

Posted by a jazz listener's thoughts at 3:20 PM