Here are two exciting, vibrant mainstream CDs that I received this past week that deserve your attention, one by some young up-and-comers in the U.S. and one by some old pros in the U.K.. 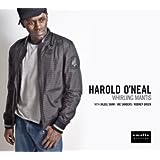 First up, the young guns. From the U.S. comes Harold O'Neal's "Man on the Street" (BluRoc Records 2013), a modern mainstream CD led by the young pianist. O'Neal has two previous sessions as leader under his belt on the Smalls Label that I posted about on January 2, 2012. O'Neal is a wonderfully talented pianist and composer who was born in 1981 in Tanzania but was raised from age 3 in Kansas City. His mentors were Bobbby Watson and Andrew Hill, as well the music of classical composers like Franz Liszt, and his compositions demonstrate a blend of jazz and classical music along with the freedom of expression he garnered from widely varied education. The two previous sessions, Marvellous Fantasy (Smalls 2011) and Whirling Mantis (Smalls 2010) were a quartet and a solo outing, and for this effort O'Neal has another quartet that includes Marcus Strickland on sax, Marcus Gilmore on drums and Joe Sanders on bass. 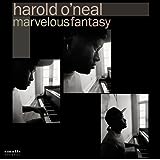 All the music is by O"Neal. The first piece, "The Dean of Swing" is a tour de force for Strickland who is out front for much of this modern hard bop (post bop?) piece until O"Neal picks up and runs with the tune late in the nine minute composition. The second piece "Is It This" is introduced by Strickland but quickly turns to O"Neal for an extended section of imaginative play. "The Ballad of Jean Grey" is a quieter, more introspective piece that O'Neal leads, demonstrating some more delicate and soulful play. Behind him Gilmore and Sanders keep the pace strong. "Gossamer's Lilt" continues with the softer side of the group and in this case is strictly a piano trio in which O'Neal is center stage with a quiet and moving tune. Strickland returns with another piece written for his lead, "Man on the Street" and he wails away with the others comping for him. The piece gets very high spirited and Strickland gets a bit shrill at times during his extended solo. "Childlike" returns the CD to a quieter place, with what sounds like a soprano sax and piano duet on a very nice, lyrical tune. It's just the two of them playing quietly, with no bass or drum support, and it is a highlight of the CD. "P.L.C" is a straight 50's style hard bop piece with parts for each member, and some nice soloing by Strickland on a more mellow tenor. O'Neal is up next and then Sanders with equally impressive solos. "Seraglio" starts with some classical piano runs that never let up; it is a solo piece for O"Neal and is closer to Debussy and Liszt than Parker and Monk. Beautiful, absolutely riveting. Finally, the CD ends with the soprano of Strickland leading the way on a mid-tempo song that finishes once again with the exquisite piano of O"Neal.

O'Neal is an exceptional young talent on the piano, as demonstrated on his early CDs and particulalry his solo piano set. Here is continues to shine, but also shines as a composer, with a wide palette and many interesting ideas that he expresses through diverse songs, interesting combinations, and particularly in writing for the sax of Strickland. This is a really nice CD of modern mainstream and impressionistic music that hints at more good things to come. My only complaint is the packaging -- no list of players, no credits on the songs -- makes it hard to know who's who and what's what. 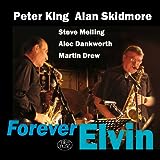 From the U.K we have music from a veteran crew, led by sax players Peter King and Alan Skidmore on alto and tenor respectively, entitled "Forever Elvin" (Miles Music 2013), and also featuring Steve Melling on piano, Alec Dankworth on bass, and Martin Drew on drums. It's simply a hard dring hard bop homage to Elvin Hayes, seven extended pieces that give each player many chances to shine. Nothing fancy here, just good straight ahead play by these veterans. A lovely alto introduces "Body and Soul, and then the nine minute piece moves over to the piano of Melling and tenor of Skidmore as well. But overall it is Peter King's song. "E.J's" blues follows and returns to some real up tempo swinging play, begun by Skidmore and the hard charging drumming of Martin Drew, but also with solos for Melling and King. The tour de force here is the hard charging "Passion Dance", opened by the piano but turned over to the saxophones to drive it forward until Melling picks it up with a Tyner like solo. It has all the force and passion of the Tyner original(s) and blows up quite a storm.

There is not a whole lot more to say. This is a wonderful live date full of passionate play by some skilled veterans of the U.K. scene.

Posted by a jazz listener's thoughts at 1:20 PM